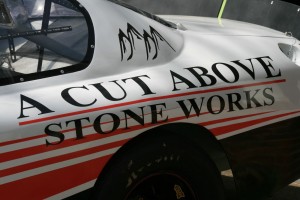 The team will enter the short track as independently owned Ryan Heavner Racing. This is after a busy off season filled with preparation. The NC driver applied and received approval for NASCAR Camping World Truck series competition.

The car was last ran at Salem Speedway in 2014 and Iowa Speedway before that. Formerly, the chassis was run by Bobby Labonte in the NASCAR Cup Series.

In January, Heavner ran his first laps on a superspeedway. He found himself at the top of the charts for the majority of the afternoon at Daytona International Speedway. He looks to carry the momentum from that ARCA Racing Series test into Fairgrounds Speedway Nashville for his first racing event of 2015.

Ryan Heavner Racing would like to thank all of their sponsors for their help in giving the team a spot on the starting grid. These include; Triple H Diesel, Viking Steel Services, A Cut Above Stoneworks, Cutting Edge Stoneworks, Printing Pro, The Bleeding Cross, Tim Meadows and family, Lawing Marble and LJ Designs. A special thanks also needs to be given to Jeff Buice and Ronnie Brown.