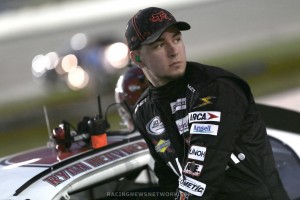 Ryan Heavner comes from an entire family of racers. Ryans’ mother raced karts for several years and Ryans’ father raced late models for around eight years until Ryan mentioned he had an interest in racing himself. Ryan has been around racing since he was born, it is in his blood stream and he is a natural at what he does.

He has since competed in several divisions of the motorsports ladder: Pro Challenge, USAR Pro Cup, and ARCA.

He acquired approval to compete on the NASCAR Camping World Truck Series circuit. The team is currently seeking sponsorship to facilitate their climb up the NASCAR ranks.

In 2019, he will graduate with a BS in Mechanical Engineering. He worked with Stewart-Haas Racing as an intern on their NASCAR Xfinity Series team.

Today, Heavner is back to the purest form of racing, karting. He currently competes in the Pro Karting class with his family owned operation.

Ryan won a double Championship in the N.C. State series in both the Jr. Sportsman 2 Lite and Heavy divisions.  He represented N.C. in the 1st Annual Maxxis National Championship and made N.C. proud by bringing home a National Title. Ryan ran 69 races..55 Top Ten Finishes, 38 of those were Top Five Finishes and he sat on 9 Poles with 12 Wins.

Ryan incurred a broken leg and missed a partial part of this years season.  When he resumed racing, he won many features, but no championships this year due to his injuries.

Ryan began racing at the age of 6 in the Dirt Naskart Kids Division with a replica of the Geoff Bodine Exide Kart.  Ryan began a full season of racing in 2004 where he won the track championship with a total of 24 straight wins.

Ryan Heavner is determined to follow in the racing footsteps of some of todays top drivers.  Ryan gives all the credit for his accomplishments to the Lord Jesus first and foremost, then too his family who supports him fully and strives to aid in helping Ryan accomplish his future goals.