Two dirt oval karting championships for Ryan Heavner in 2017. Ryan Heavner Racing was set to fight for both titles at Liberty Raceway Park.

However, the season ending Champions on Dirt Series has been canceled due to snow. As a result, Heavner has been awarded the championship in both classes after the 4 events run.

Ryan Heavner won the FK Clone 400 division by exactly 100 points. He opened the season in a hole after a 9th place run in the debut round at Liberty Raceway Park. After that, he immediately started digging with a win, 5th and 3rd. Three straight top 5 finishes put him at the top of the board in drivers’ standings.

There were 4 races in the FK Clone 425 class, Ryan Heavner had a worst finish of 2nd. A race win and 3 runner-up finishes have presented him with the championship.

The dual championship result softens the blow from the Tri-State Pro Series ending result. Heavner lost the Stock Super Heavy title by just 3 points. Heavner won 2 races out of the 6 on the schedule. Despite that, he came up just short, ending up tied for 2nd.

Ryan Heavner Racing is scheduled to run the Winter Series. That series is already underway, the second round will take place this weekend at Fastrax Kartway.

There’s only a microscopic break in the action following the weekend of dirt racing. The team will return for the New Years Bash at Paradise Raceway.

The Tri-State Pro Series banquet is scheduled for January 2018. 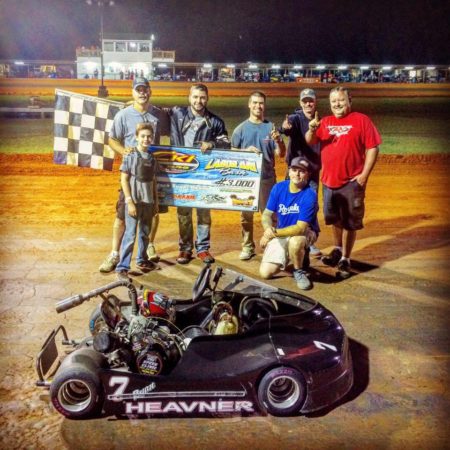